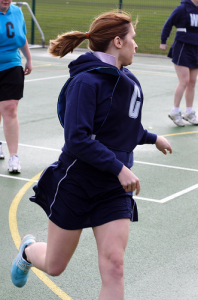 It is not always easy for children to avoid unsuitable activities at school.

This morning a group of mothers were chatting at hydrotherapy about problems their children faced at school.

Children with Ehlers-Danlos syndrome who had been told by doctors not to participate in certain activities were still being forced to join in.

“Why didn’t you say something?” parents wanted to know. The children all said they had tried to say no and give their reason, but the teacher just would not listen.

This same theme came up again and again.

Children are not believed.

School notes don’t seem to work because teachers can be different from week to week.

My sister is a teacher.  She told me that so many kids try to get out of sport that teachers become deaf to excuses after a while.

In several of the stories the children suffered painful injuries as a result of being forced into unsuitable activity in the classroom as well as on the sports field.

For these parents I was speaking to, an injury to their child had a big impact.  It might mean having to take time off work.

It could also mean visits to hospitals, doctors or physiotherapists,  medications and watching their kids in extra pain that was avoidable.

I’d be interested to hear whether you have had problems like this and what strategies you have tried.

What You Can Control

You may not have control of what your child has to deal with. You have total control over how well you take care of yourself. If you look after yourself you can handle anything life throws at you.